With our solid track record and knowhow spanning a wide range of industries, we are able to extensively support your company's logistics environmental improvements.

What Are Our Conveyor System Related Technologies?

DAIICHI KOGYO utilizes conveyor systems to provide solutions for the various requests from customers, such as "I want to rapidly send large volumes of packages across Japan and overseas," or "I want to automate my factory lines."
The mail order industry, which as you know has grown explosively in recent times, now has to deliver products ordered online as quickly as possible.
We are also providing systems capable of sorting mass volumes of articles and contributing to speeding up logistics processes.
While developing new types of machines every now and then, we have continued to provide unique, best-fit systems. Our lineup of conveyor systems contains many devices we have developed over the years to match the needs of our customers from a wide range of industries, including parcel-delivery centers, newspaper printing centers, large post offices, banks, and hospitals. 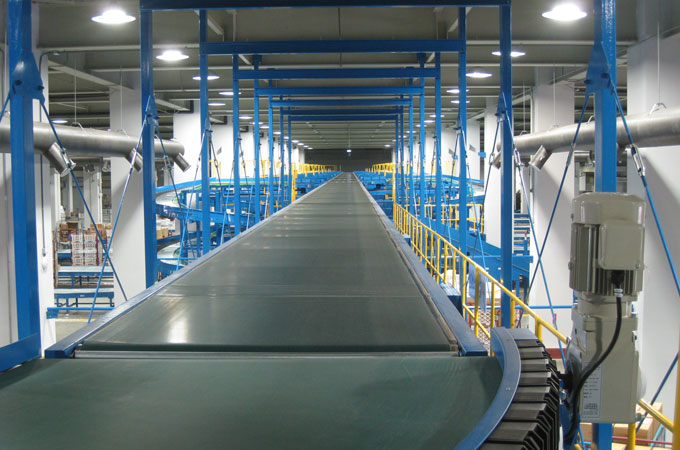 The following describes one example of our systems as a case model.
This case model is imagined for use in a logistics center for the parcel-delivery business or the like.
As for the function of the center, a Wave Sorter is installed on the first floor of the center to sort the comparatively large articles. The outgoing articles are discharged in 30 directions, while the incoming articles arrive from six trucks. Also, a Vertical Cross Belt Sorter is installed on the second floor to sort the comparatively small articles such as envelope-sealed documents.
Using this model, we will describe our systems. 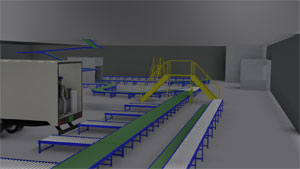 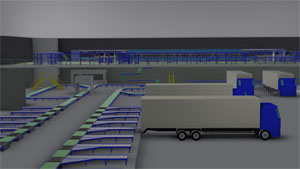 After being loaded on the conveyor, articles are scanned by barcode readers and sorted to the discharge stations registered in the system. 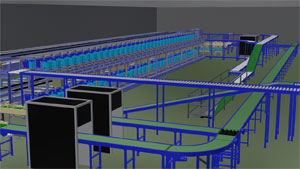 After articles have been loaded onto the conveyor as incoming articles, they are conveyed to the second floor along an upward sloping conveyor.
On the second floor, each article is separated and scanned by a barcode reader. The articles are loaded onto a sorter and sorted to the discharge station registered in the system. At the discharge stations, containers specially designed for sorting are installed.
After sorting has been completed, the specially designed containers are sent off.
The specially designed containers are conveyed down to the first floor to merge into the conveyor line of the Wave Sorter. 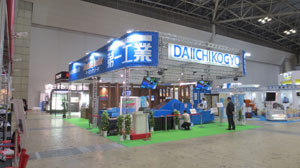 The Conveyor System Division also showcases its systems at trade exhibitions. The main exhibitions we attend are Logis-Tech Tokyo and the Japan Newspaper Production Show (JANPS).

Take the first step and discuss your needs with us today.We will happily respond to your requests for information materials, your questions, or your requests for a consultation regarding DAIICHI KOGYO or our services.
Contact us by email